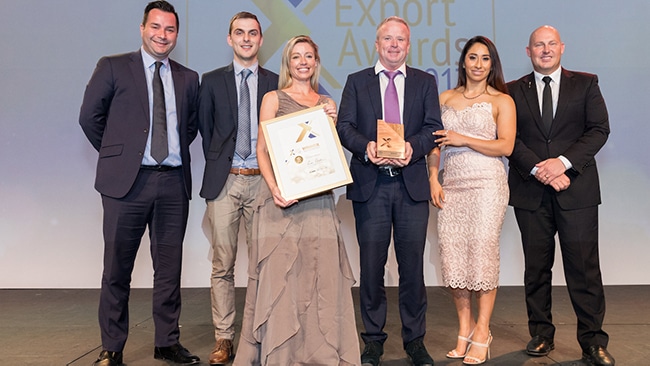 The winning streak has continued for Gold Coast based Opmantek Software as they were announced winners of the Queensland Export award for Digital Technologies for a record 4th consecutive year.

The software development company has seen phenomenal growth since inception in 2011.  This year the customer count topped 130,000 organisations in more than 130 countries making use of their software to monitor, manage and audit their IT environments.  International research organisation, Gartner, have featured Opmantek’s products in a number of recent industry reports due to its strong capabilities in the emerging fields of network automation, IoT management, AI ops and predictive analytics.

Opmantek chairman, Danny Maher was there to accept the award on behalf of the company “We are very proud to be recognised as Queensland’s leading digital technology company again this year. Our customers love our products and this award is recognition of another great year for the company”

Earlier this year, strong demand from the US and Latin American markets drove a decision to establish a new head office and executive leadership team in San Francisco so that sales and marketing initiatives could be delivered in time zone.  Incoming CEO, Craig Nelson congratulated the Australian team from San Francisco on the win “It’s fantastic recognition and a great accomplishment for an Australian company that is truly relevant on an international scale, I look forward to more exciting times of growth at Opmantek.”